Patio umbrellas sold at Costco recalled after reports of fires

1. For which of these would you use a histogram to show the data?

(a) The number of letters for different areas in a postman’s bag.

(b) The height of competitors in an athletics meet.

We know that Histogram is a graphical representation of data if the data represented using class- interval.

Since the cases mentioned in options (b) and (d) can be divided into class intervals, histogram can be used to show the data.

Similarly, since the cases mentioned in options (a) and (c) cannot be divided into class intervals, histogram cannot be used to represent the data.

2. The shoppers who come to a departmental store are marked as: man (M), woman (W), boy (B) or girl (G). The following list gives the shoppers who came during the first hour in the morning. 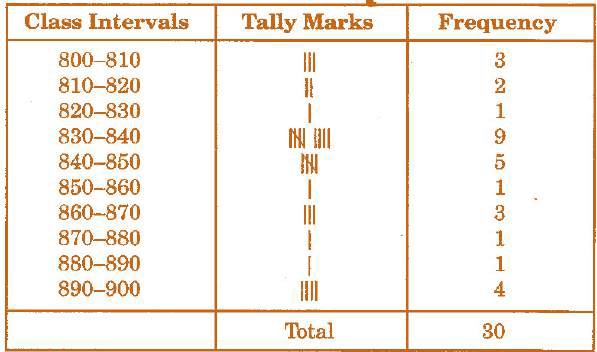 4. Draw a histogram for the frequency table made for the data in Question 3 and answer the following questions.

(i) Which group has the maximum number of workers?

5. The number of hours for which students of a particular class watched television during holidays is shown through the given graph.

(i) For how many hours did the maximum number of students watch T.V.?

(ii) How many students watched TV for less than 4 hours?

(iii) How many students spent more than 5 hours in watching TV?

1. A survey was made to find the type of music that a certain group of young people liked in a city.

Adjoining pie chart shows the findings of this survey. From this pie chart, answer the following:

(i) If 20 people liked classical music, how many young people were surveyed?

(ii) Which type of music is liked by the maximum number of people?

(iii) If a cassette company were to make 1000 CD’s, how many of each type would they

(ii) Since 40% of the total people surveyed liked light music and no other form of song liked more than that, we can conclude that Light music is liked by the maximum number of people.

2. A group of 360 people were asked to vote for their favorite season from the three

(i) Which season got the most votes?

(ii)Find the central angle of each sector.

(iii) Draw a pie chart to show this information

(i) According to the table given in the question, Winter season got the most votes.

3. Draw a pie chart showing the following information. The table shows the colours preferred by a group of people.

4. The adjoining pie chart gives the marks scored in an examination by a student in Hindi, English, Mathematics, Social Science and Science. If the total marks obtained by the students were 540, answer the following questions.

(i) In which subject did the student score 105 marks?

(ii) How many more marks were obtained by the student in Mathematics than in Hindi?

(iii) Examine whether the sum of the marks obtained in Social Science and Mathematics is more than that in Science and Hindi. (Hint: Just study the central angles).

Thus, 30 more marks were obtained by the student in Mathematics than in Hindi.

∴, the sum of the marks in Social Science and Mathematics is more than that in Science and Hindi.

5. The number of students in a hostel, speaking different languages is given below. Display the data in a pie chart.

1. List the outcomes you can see in these experiments.

(a) Spinning a wheel (b) Tossing two coins together

(a) There are four letters A, B, C and D in a spinning wheel. So there are 4 outcomes.

(b) When two coins are tossed together. There are four possible outcomes HH, HT, TH, TT.

2. When a die is thrown, list the outcomes of an event of getting

(ii) (a) Outcomes of event of getting a number greater than 5 is 6.

(a) Probability of the pointer stopping on D in (Question 1-(a)).

(b) Probability of getting an ace from a well shuffled deck of 52 playing cards.

(c) Probability of getting a red apple. (See figure below)

outcomes. Pointer stops at D which is one outcome.

So the probability of the pointer stopping on D = 1/5

(b) There are 4 aces in a deck of 52 playing cards. So there are four events of getting an ace.

Probability of getting red apple = 4/7

4. Numbers 1 to 10 are written on ten separate slips (one number on one slip), kept in a box and mixed well. One slip is chosen from the box without looking into it. What is the probability of .

(i) Outcome of getting a number 6 from ten separate slips is one.

A total of five sectors are present.

Out of the five sectors, three sectors are green.

∴, probability of getting a green sector = 3/5

∴, probability of getting a non-blue sector= 4/5

6. Find the probabilities of the events given in Question 2.

So there is one outcome out of 6.

∴,probability of getting a number greater than 5= 1/6

∴,probability of not getting a number greater than 5= 5/6